curbing ag emissions is now on the policy agenda, but food security imperatives and farming fragmentation mean change will be slow

Agriculture has to date been de facto exempt from Beijing’s efforts to mitigate climate change, yet it is the source of some 8 percent of China’s emissions (CO2e terms). Now, as the Xi administration’s carbon neutrality campaign ramps up, ag emissions and carbon sequestration are appearing on the policy agenda. Ag methane emissions are targeted in the ‘US-China joint Glasgow declaration’, issued at COP26 on 10 Nov 2021, further suggesting a shift is coming.

Food security imperatives and a highly fragmented sector suggest incremental change is the likely path—without the disruption seen in steel, energy and other sectors.

Greenhouse gas (GHG) emissions in the PRC, of which ag is a major source, keep rising y-o-y. The PRC will achieve peak carbon before 2030 and neutrality by 2060, pledged Xi in September 2020.

Agriculture’s GHG contribution frustrates precise measurement. CO2 emissions are neutralised by sequestration in soil and vegetation. But both methane and nitrous oxide, released in vast quantities on farms, can cause far more global warming than CO2. Ag contributes 40 and 65 percent of China’s total emissions of the two gases respectively.

Quick fixes are few and panaceas unlikely, thus ag emissions reductions will come from a patchwork of incremental measures.

ag GHG emissions as a proportion of total PRC emissions in CO2e terms, 2010 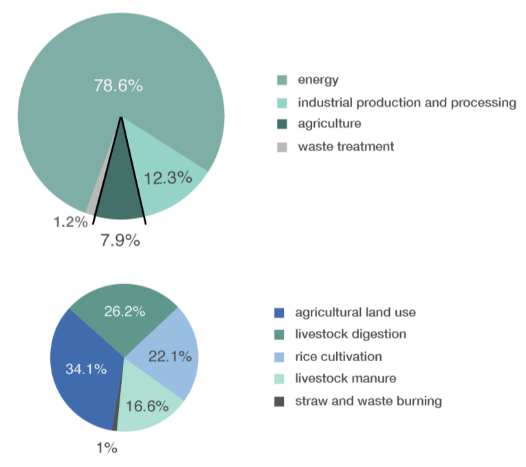 Planners have long shied away from tackling ag GHG emissions head-on, except when doing so aligns with other policy goals. A case in point is the circular ag campaign that replaces chemical fertiliser with reclaimed manure, straw and ag waste.

Policy support is on the way for energy-efficient machinery and renewables. Emissions standards for ag machinery will be tightened.

Ag-specific methane and nitrous oxide emissions are left out of the 5-year plan, but a recently issued catalogue of low-carbon ag tech puts both front and centre. Rolling out new strains of rice that emit less methane and feed formulas that reduce livestock enteric fermentation are just two of a range of measures. This is more than a wish list; dairy giant Yili claims it is already seeing success with new methane-reducing feed strategies.

Methane reduction features in the US-China Glasgow declaration. An action plan is expected from Beijing within a year. As part of Beijing’s 1+N scheme for cutting emissions, an ag sector-specific carbon neutrality plan is also underway.

The green ag 5-year plan, 1+N scheme and ag carbon neutrality plan draw together measures that have to date been scattered across ministries. This consolidation is intended to ensure a more integrated, whole-of-government approach that will see outcomes better evaluated.

These initiatives deserve to be taken seriously, but ag poses challenges like those of no other sector. As a bedrock of food security and guarantor of social stability, food production remains sacrosanct.

In addition, the PRC is also seeing food demand growth, not least for animal products. GHG emissions from livestock are forecast to grow 2–16 percent by 2050. Ramping up imports may alleviate some pressure, notes CAAS (China Academy for Ag Sciences), but increasing demand will drive growth in the livestock industry and Beijing is likely to factor this into policy rather than try to discourage it.

Mechanisation, an undeniable driver of emissions, is rising in the sector and will require emissions standards to be enforced.

A third set of issues arises from the small-scale, fragmented nature of the ag sector. With some 350 million smallholders reliant on ag for their livelihoods, and comparatively few large-scale farming enterprises on the scene, standardising and supervising emissions reductions pose real challenges—unmatched by the worst regulatory nightmares in PRC industry.

the market, yet again

Integrating ag in the national carbon market has also been suggested, though it would likely be limited to highly concentrated downstream sectors like pork and dairy. Market principles would ideally propel green change with no cost to output levels. But with the holy grail of food security at stake, pressure to unwind top-down production targets will be limited and cautiously applied.

Reconciling economic and environmental goals, curbed use of yesteryear’s miracle-makers may be decisive in controlling ag emissions. Fertiliser manufacturing generates massive emissions; the products are then overused, leaving excess nitrogen in soils. This leaks out as nitrous oxide, or leaches into waterways causing eutrophication of waters as far away as the Yellow Sea. Over two-thirds of global nitrous oxide emissions stem from ag, driven by scandalously inefficient fertiliser use. Curbing this is an easy way to mitigate environmental risks and save money, without sacrificing yields. Use began to decline after 2015.

Campaigns for circular ag and emissions controls may help fertiliser use decline faster as manure, compost and straw are promoted in its place, also boosting sequestration. Slow-release and water-soluble fertilisers will also be prioritised, states the new 5-year plan. These trends, notes Zhai Jidong 翟际栋 Kingenta Ecological vice president, tie in with recent curbs on fertiliser exports as part of long-term strategies to reduce the PRC’s fertiliser footprint. 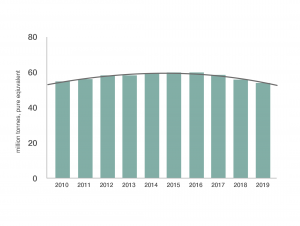 Dairy giant Yili is bidding for a lead role in decarbonising ag. First taking steps to shrink its carbon footprint in 2016, it was hailed as an ‘outstanding’ carbon curber. Yili claims to strictly monitor its cows’ emissions; its new feed formulas reduce their stomach rumblings, source of some 17 percent of ag GHGs. The rumblings are now a key focus for MARA’s (Ministry of Ag and Rural Affairs) top 10 tech measures. ‘Being green’ is helping Yili rate as the ‘most trusted provider of healthy food in the world’, bragged vice president Zhao Xin 赵昕 at the 2021 CIIE (China International Import Expo). Companies taking the lead in investing in green tech and practices will likely present the industry with a model for its envisioned low-carbon transformation.

Integrating ag into the PRC carbon market may inject market principles, argues He, rewarding producers who more efficiently reduce emissions. Prices would reflect the real costs of a low-carbon shift. Low income groups would in turn be compensated for services performed, e.g. being paid for creating carbon sinks. Low-carbon branding would be a collateral benefit, earning producers premium market prices. Better product standardisation and labelling is needed, he argues, to have this effect.

Associate professor at Huazhong Agricultural University since 2017, Zeng holds a PhD from the University of Kentucky. Supported by NSFC (Natural Science Foundation of China) grants, he works on eco-compensation for lowering carbon in ag waste recycling and livestock breeding.

For Zeng, it is still early days for a low-carbon transformation in ag. Production is still resource-intensive, he argues; green and high-quality products still under-supplied. Curbing emissions from planting, breeding and ag machinery must go in tandem with advancing carbon sequestration, above all via farmland carbon sinks, circular ag and ecological fisheries, argues Zeng in an Economic Daily article, 12 Sep 2021. Subsidies will play a key role in this effort. Hailing the new 5-year plan for green ag at an 8 Sep 2021 conference, Zeng notified nearly C¥44 bn in central funding for the development of low-carbon and green ag projects by the end of the year.

An ag major, Zeng became chief agronomist in July 2021, heading the Department of Development and Planning, making him responsible for overseeing ag policy design and coordination.

11 Nov 2021: developing low-carbon ag brands announced as the goal of a new 5-year plan on greening the food industry

11 Nov 2021: developing a national action plan on methane announced as part of the US-China joint declaration at COP26

30 Aug 2021: ‘Opinions’ on solid waste pollution call for recycling of ag waste such as animal manure, straw and plastic film