China Policy will be taking a break over the National Day Holiday 1-7 October. Your next signal will drop on 10 October and your next batch of shifts will be with you on 12 and 13 October. As always, please contact us at client.services@policycn.com with any queries

The CER (China-Europe Railway), a flagship Belt and Road transport artery spanning the Eurasian continent launched in 2011 and prospered in the early pandemic. Lockdown-induced disruptions to sea and air routes and soaring ocean shipping fees diverted traffic to rail. The National Railway Group reports a spike of 15,183 trains sent in 2021, 22 percent higher than 2020, which had itself seen growth of 50 percent y-o-y. And compared to 2016, annual cargo volume rose in 2021 by nine times, from 8 to some US$75 bn.

As 2021 exports surged to $3.36 bn, thanks to strong demand from advanced countries, the route grew in popularity for moving manufactures from the PRC to Europe. 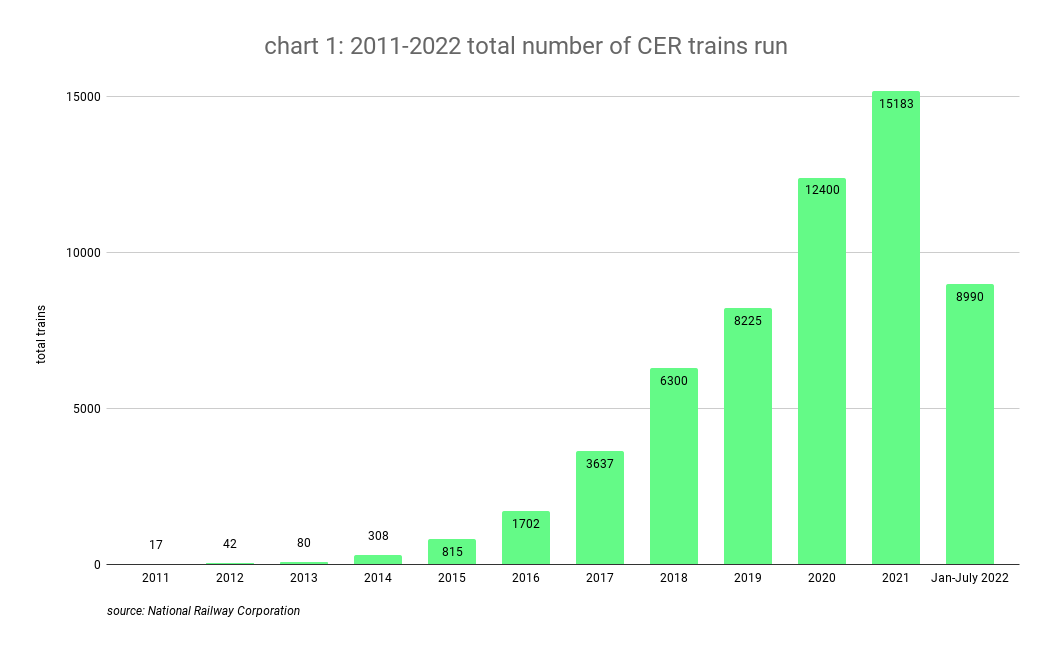 ‘Good times can’t last’, as the Chinese proverb goes. The line’s security status plummeted with Russia’s February 2022 invasion of Ukraine. Freight passing through Ukraine was suspended or diverted. Over 98 percent of the rail capacity is reportedly to continue normal operations, but damage to market confidence hurt bookings from EU clients. With current rail routes all passing through Russia before reaching Europe, sanctions on Russian banks impose extra risks on freight settlements.

Given the conflict, avoiding Russia and better connecting rail networks now becomes urgent. A China-Kyrgyzstan-Uzbekistan railway (CKU), approved during a PRC–Central Asian foreign ministerial convention in June 2022, is to start work in 2023. And most importantly, the link loops to the south, bypassing any Russian territory.

Proposed back in 1997 but long stymied by Russian interests and political instability in Kyrgyzstan, the line is designed to complete the CER’s southern corridor, connecting China and Europe via the Caspian Sea and Turkey. Shorter by some 500km, it should speed up transit time by about a week relative to CER’s northern and middle corridors, which span Russia’s Far East from China’s northeastern provinces and run from Xinjiang through Kazakhstan, respectively.

With no let-up in the Ukraine war and demand weakening as recession looms, the CER has seen further drops in EU orders.

Rail freight costs to Russia have risen as well, in fact surpassing those to Europe despite the shorter distance. Port congestion is reportedly worsening at the PRC-Russia border. Similar to air and sea shipping trends, the price per standard container peaked at US$15,000 in 2021 for the CER. Current costs ($7,500-$10,000) remain significantly higher than pre-pandemic levels (US$2,000) after some fluctuations this year.

Time is money—being faster, the CER is now a popular channel for cross-border e-commerce, typically less bulky but reliant on quick delivery. However, the imbalance between west- and east-bound demand leaves many containers empty on the return leg.

Having less capacity than ocean shipping is another severe constraint on rail. Total CER freight volume accounted for only 4.45 percent of total China-Europe trade by ocean in 2021. Local government subsidies have sponsored expanded domestic CER routes. While reducing and ending subsidies have long been urged as rational market reforms, rail prospects are further clouded by slowing EU demand and sinking confidence.

The Samarkand gathering, President Xi’s first overseas excursion since the pandemic, may help Beijing strengthen Central Asian ties: they are of growing strategic significance in trade and BRI investment, not to mention geopolitical solidarity. Despite Xi’s proclaimed ‘no limit’ partnership with Russia, Beijing has striven for diplomatic neutrality amid mounting international criticism and muted verbal support for Putin’s war among SCO members.

A region of historical Russian influence, Central Asian states have also sought greater independence in foreign policy decision-making and moved to diversify economic partners. Kazakhstan, for instance, has avoided complete alignment with Russia on its rhetoric towards the war nor helped the invader shun Western sanctions. The faltering of Russian controls in the region could provide space for rising PRC influence.

Resurgent border conflicts and domestic political unrest among Central Asian states, such as the recent skirmish at the Kyrgyzstan-Tajikistan border in early September, will nevertheless continue to create head-scratchers for BRI traders and investors. The shallow fiscal strength of the CKU’s two hosting countries, with a major portion of Kyrgyz debt owing to China and a backward transport infrastructure system, might further delay the dream of a 15-day Eurasian transport corridor.

The 2022 Samarkand Summit was a milestone in the SCO’s 26-year history. Demonstrating multilateralism amid rising global protectionism and isolation, it reinforces regional cooperation against terrorism and extremism, prioritising the collective security of member countries. The SCO approved new projects helping build a Eurasian economic corridor amid slowing regional growth due to the pandemic. BRI cooperation in Central Asia will enter a new chapter; Iran was approved as an official SCO member, and accession began for Belarus. Dialogue partner status was granted to Bahrain, Maldives, Kuwait, the UAE and Myanmar, expanding the organisation’s clout against Western alliances.

Rewriting the current world order in the face of US hegemony is where Russia finds ‘non-Western world’ support. This is notably in Latin America, the Middle East and Africa, rising faster than the West in recent years. Developing regions are left poor and backward by the system due to Western exploitation of global resources, of ‘peripheral-central dependency’. The Russia-Ukraine conflict now shakes this. Russian central bank’s support for the ruble against Western sanctions have sped up de-dollarisation and de-SWIFTing in non-Western countries. The world is evolving towards a more equal multipolar order, with the east rising and the west declining. Western claims of a ‘sea power order’ dominating one based on ‘land’ must confront BRI-enabled win-win cooperation.

A high-profile international affairs commentator and TV persona, Zhang, a professor at Shanghai’s Fudan University, is a well-known critic of Western values and a strong exponent of ‘Chinese exceptionalism’. His pro-CCP agitational comments, e.g. touting the merits of general Secretary Xi’s zero-COVID policy, leave him notorious among PRC intellectuals but popular in populist media outlets.