roundup from our portfolios

Ag production is staggering under record heat and drought. Rice in the south, the top staple crop, is in big trouble. Extreme weather exposes bottlenecks in the sector, notably in irrigation; despite years of development, it fails to cover some hilly fields. Central subsidies and technical support are on the way. But early warning, infrastructure and breeding of drought-resistant varieties urgently need a boost.

Power shortages made an unwelcome return in August. Sweltering temperatures have left dams near dry in Sichuan, spelling trouble for the hydro-reliant province and its neighbour Chongqing. Both responded with power rationing and industrial shutdowns, expected to ripple through to solar and NEV (new energy vehicle) supply chains. Sino-US climate cooperation is also feeling the heat after Beijing halted bilateral climate talks in response to House Speaker Pelosi’s Taiwan visit, politicising an area once beyond tensions between the two powers.

Nonetheless, the domestic green charge continued with release of plans to peak industrial carbon emissions, albeit with modest targets.

A working group has been created to oversee China’s accession to the DEPA (Digital Economic Partnership Agreement) under its joint committee. Announced by the Ministry of Commerce on 18 August, the group is a step forward in negotiations. Sanctions have been slapped on Taiwanese food exporters and natural sand importers, a sure retaliation to Pelosi’s visit. But, given the measly scale of targeted products, it will hardly trigger a crisis. Trade continued to rebound in July with exports to ASEAN countries growing the most, by over 30 percent. Auto exports, above all NEVs, have had a stellar performance this year—they grew by 67 percent in July—with shipments mostly setting sail for Western Europe and Southeast Asia.

COVID-19 restrictions on international and domestic travel, shipping and at passenger and vehicle terminals, have been streamlined by the Ministry of Transport. But the virus, real estate crisis and heat wave have burned expectations of the economy. Commentators and officials no longer expect a V-shaped recovery. Policy is shifting to boost market confidence, with the central bank cutting interest rates and State Council announcing even more infrastructure funding.

The July 28 politburo meeting vowed to greenlight more investment deals in the platform economy, allowing tech firms to resume some of their investment activities after a period of tight scrutiny. An ‘anti-monopoly system for concentration of undertakings’ was launched by the State Administration for Market Regulation in August, streamlining standards for M&A disclosure and review. Beijing advanced the first measures promoting the ‘virtual human’ industry, looking to grow the sector to C¥50 bn by 2025.

The 14th 5-year plan for cultural development is now live. It is deemed a critical step forward in reforming the PRC’s cultural framework, and strengthening ideological education and its official value system. The plan urges dissemination of official socialist values, Party ideology, civil morality and traditional Chinese culture. ‘Breaking out’ from and ‘decoupling’ with global mainstream humanities and social sciences is also urged; ‘China’s own’ benchmarks for humanities and social science disciplines are touted in the plan.

The National Health Commission, on the first anniversary (16 August) of the three-child policy, compiled the Opinions from agencies urging better rollout of pro-natal support. This is to be headed up by a 26-member inter-agency group for family planning. The population continues to decline.

We welcome internship applications on a rolling basis. If you want to work at the leading edge of policy analysis on China, please join our team! See our careers page or contact hr@policycn.com for information. 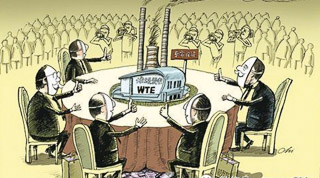 ‘Game of interest’ is a widely-used descriptor—a byword for disguised political conflict linked both to rent-seeking and outright corruption. Mao Zedong introduced the term ‘contradictions among the people’ to explain why conflict persisted, despite classical Communist Party claims to have ended class, etc. division. Under the socialist state, all interests would be resolved by the Party. The ‘game’ motif borrowed from game theory has a connotation of divided agendas lingering in the background. In the illustration, masked figures cut mercenary deals oblivious of, and injurious to, public interest.

when three children are still not enough

Better aged and child care promised in 2021’s ‘three-child’ policy will, Beijing now frets, fail to convince women to have children. Rebooting population growth, it is now realised, entails much more than lifting the cap on births: a birth-friendly society requires a whole basket of policy tools. A multi-level mechanism set up to coordinate the roll-out of measures conducive to child-bearing is a step forward. full post open access →

Just as climate change will make weather less predictable, renewables’ growing share in the energy mix will see increasingly erratic power generation. This, notes Lin, leaves grids hostage to unstable power sources under erratic extreme weather. Build smart grids, he suggests, proactively expanding them to cushion weather shocks. He notes that Sichuan once focused on sending electricity out of the province at the expense of inward transmission, limiting its capacity to import power when needed. Building such capacity, stresses Lin, calls for timely investment and planning.

Leading Xiamen University’s China Institute for Studies in Energy Policy since 2013, Lin holds a PhD from the University of California. He is a prolific media commentator and an editor of the Energy Economics journal.

Supervision rules and roll-out protocols should imply clear positive and negative lists to ensure platform companies’ compliance. This will allow capital to ‘go on green’ rather than ‘stop on red’, and help draw capital to the areas that most need it from a societal development perspective. The ‘green light, red light’ mechanism for capital also allows companies in different subsectors into the market more confidently, costing less to comply. Constant improvement and innovation in relevant rules and governance will be needed for an effective ‘green light, red light’ approach. Based on the type and level of platforms, there should be different negative and positive lists to make supervision more scientific, targeted and effective.

A rising star in competition law, Chen serves on fair competition expert committees in Tianjin, Jiangsu and Zhejiang. He is a prolific author, frequently contributing to influential business and law newspapers and magazines in China. Holding a legal doctorate from the East China University of Political Science and Law, Chen did post-doc research on theoretical economics at Jilin University.

Declining population has come earlier than expected, the result of decades-long birth control dating back to the 1970s. In 1991, recalls Yuan, total fertility was already failing to replace the population from one generation to the next. Total population will continue to fall as the number of young people declines and more choose to delay marriage. A common demographic pattern across the globe, this will negatively impact birth rate as well as family-related consumption, says Yuan. Develop a ‘scientific understanding’ and approach to population decline, he urges.

gems from our feed of policy releases and domestic debate

context: Largely unseen since 2021’s power crisis, power shortages have returned in the wake of drought and record temperatures, concentrated in Sichuan and Chongqing. Sichuan is worst affected given its heavy reliance on drought-stricken hydropower. Authorities are hoping shortages will dissipate as the heatwave recedes. Power rationing may affect NEV production, especially as it looks to have now been extended to 25 August 2022.

context: The pact is considered to be an inclusive inter-governmental cooperation framework for the digital economy that offers alternative solutions to the US/EU rules on digital trade. However, Beijing’s strict regulations on data localisation will get in the way of upcoming negotiations.

context: Current economic challenges in China are not so much related to inadequate economic policies. Rather, it is the emphasis on political ambitions that creates mounting uncertainties and depresses market activities. Various economic instruments may only alleviate the problem on the margins, as the real issues stem from political institutions.

Beijing government gets behind the virtual human technologies

context: Applications using virtual human technologies have been on the rise, despite the reservations of regulatory authorities and concerns from technology experts. But as Beijing gets tough on influencers, the ability of virtual humans to avoid scandals and controversies that may haunt human celebrities has an added level of appeal for authorities and industry alike.

context: Beijing has been reforming its cultural system to strengthen ideological education and its core values system.

building up a healthcare talent pool

context: Beijing has reckoned with a talent shortage in the healthcare system amid growing demand for medical products and services. To step up workforce supply, in quantity and quality, the National Health Commission (NHC) released a plan to train more medical professionals across the healthcare sector. As part of the ambitious ‘Healthy China 2030’ strategy announced in 2016, how the initiatives under the new plan will keep pace with the broader reform agenda remains to be seen.

China Policy is a Beijing-based research and advisory company. Supporting our clients at multiple levels, from in-house research teams to CEOs and boards, we help them anticipate, understand and respond to China’s changing domestic policy and geopolitical environment. Contact us for more information on our publications and services.