linking up the GBA

integration with the mainland: a lot of water to go under the bridge

This is the third in our series of cp.signals tracking Beijing’s GBA vision.

paths to integrating Hong Kong and Macao need to factor in their vast differences, but Beijing’s top-down approach is not for turning

To expedite the merger of Hong Kong and Macao with Guangdong and the mainland, zones have been set up in the GBA (Greater Bay Area) to focus on cross-border flows and integration. Qianhai, a zone aspiring to maximise Shenzhen’s tech innovation potential by linking it to Hong Kong’s strengths in basic research; Hengqin, an island that is part of the city of Zhuhai, is set to restructure Macao’s casino economy. High-level plans were issued in September 2021, but stringent COVID control policies keep the borders closed. 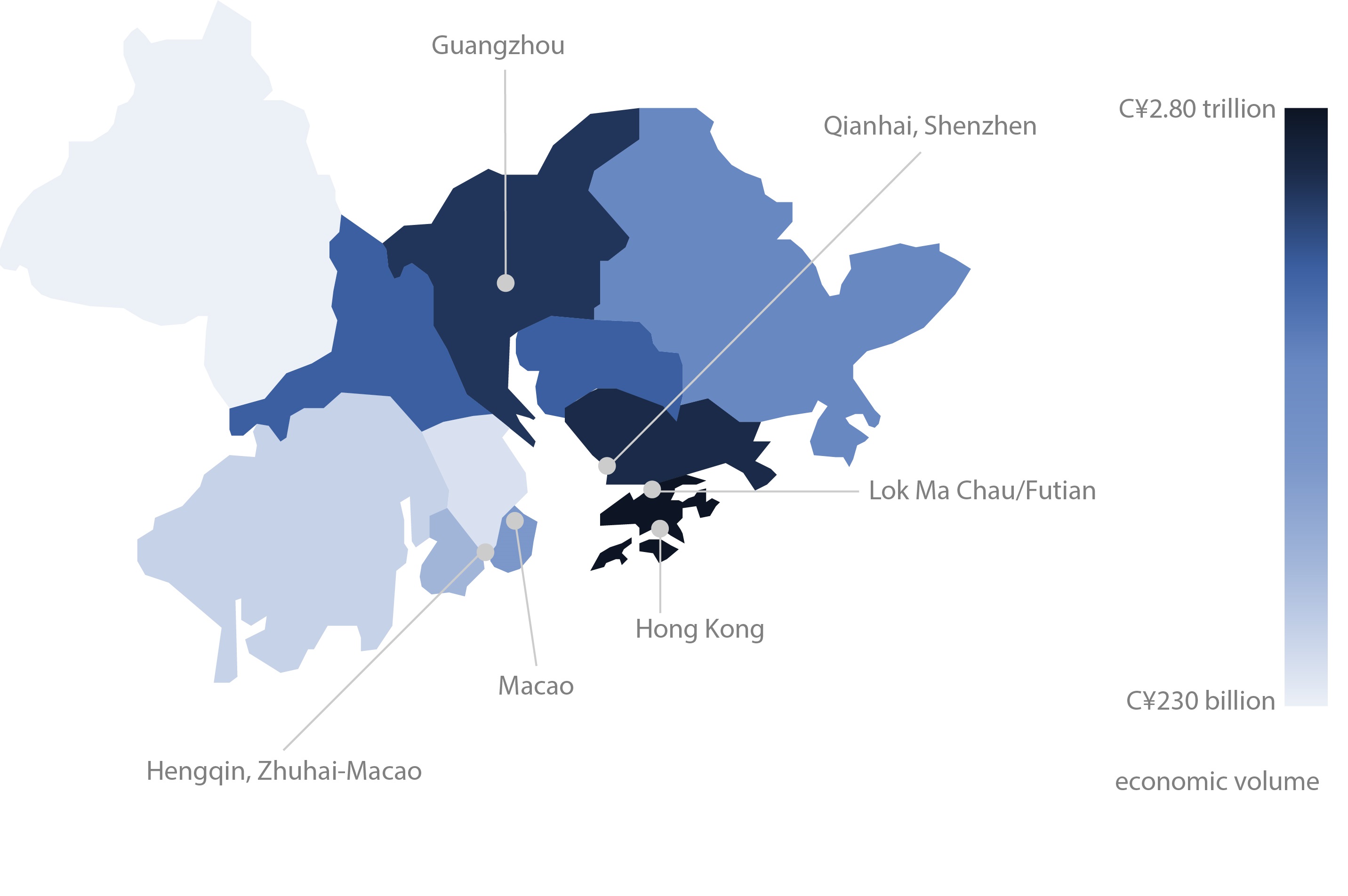 Shenzhen’s advantage remains in industrial innovation: tweaking the end product of research for commercial use. It aspires to be home to complete tech innovation chains, but game-changing breakthroughs from basic research are rare. With liberal institutions and world-class research universities, Hong Kong would once have been the perfect partner to the GBA’s innovation strength and would have brought in international capital. But pilot reforms bringing Hong Kong standards in tax, legal and currency systems to the mainland have stagnated, discouraging close partnerships. Qianhai has so far failed to thrive.

Set up in 2015, the zone was to bring in value-added modern services industries (e.g. financial, legal and insurance services), the core of Hong Kong’s economy. After the zone expanded sevenfold this year to encompass areas with industrial and infrastructure capabilities, Qianhai is now pinning its future on high-end manufacturing and innovation across ICT, biopharma, new materials and new energy vehicles.

Partnerships in biotech are on the rise amid resurgent COVID-19, with Hong Kong to provide leading biopharma research and IP protection rules, and Shenzhen to serve as fertile ground for industrial and commercial applications with large data samples. Hong Kong’s advanced financial and legal services are hyped to support innovation, as Qianhai further liberalises recognition of professional qualifications.

The fancy graphics and endless buzzwords of the hastily concocted plan have allayed few concerns about industrial overlaps or resource rivalry with existing high-tech parks in both cities, not to mention its mega expense and long return cycles. Paul Chan 陈茂波 Hong Kong chief financial secretary points out that a scitech centre in the underdeveloped border areas would rely heavily on the grace and favour of its more sophisticated counterpart across the Shenzhen River.

The plan proposes a dedicated senior bureaucrat and formal coordination with Shenzhen to kickstart the Northern Metropolis development. Opening of two-way patent registration and expansion of cross-border medical equipment flows are also on the cards. Beijing is yet to agree.

Hengqin island, on the less developed west side of the Pearl River, promises to triple Macao’s industrial space. Advancing chip design technology and critical microelectronics supply chains are featured in the Hengqin plan, but the zone lacks supporting infrastructure and research capacity. Working with universities in Macao is the long-term plan. Firms and individuals relocating supply chains to the island will benefit from preferential tax policies with a 15 percent cap. Capital goods with over 30 percent of their value added locally will enter the mainland duty free. Firms are urged to export processed raw materials via Hengqin to other GBA regions for further processing. But potential competition with neighbouring Hainan free trade port risks diversion of international and domestic investment inflows.

Rivalry apart, Hengqin’s prime goal is to create jobs and break Macao’s reliance on casinos. Industry parks producing traditional Chinese medicines have been built, promoting cultural and services exports. Tourism such as family entertainment shows, high-end shopping and curated exhibitions are set to attract consumers. Casinos will continue to function but will be scaled down; they are encouraged to invest in the design and manufacture of smart gambling facilities to extend local industrial chains. As Beijing tightens regulatory supervision over casinos, international capital will face stricter scrutiny in the name of national security.

A Guangdong/Macao co-committee governing Hengqin is, depending on where you sit, either further weakening the ‘one country, two systems’ principle, or is an ‘institutional breakthrough’ within it. The recent crackdowns on Macao junkets signal Beijing’s tenacity in shaping integration top-down. Hong Kong is bound to watch the experiment closely but may dislike what it sees.

Plans to create jobs in Guangdong fail to address unemployment issues for Hong Kong’s less-skilled workers, while the city’s polarising political and social sentiment creates extra headwinds. Official visits paid by Carrie Lam to Beijing and Shenzhen serve high-level interests, but bottom-up voices from the private sector and the general public need to be better addressed. With a long line of ‘patriotic’ candidates, upcoming 2022 chief executive and legislative council elections keep policy, for the moment, uncertain.

The Northern Metropolis’s scitech centre is to be a new economic growth engine for Hong Kong, says Chen, in addition to the traditional financial CBD in the south. The city placed too many eggs in the finance basket, he argues; regional planning has failed to hook up with neighbouring cities. It is tech firms that will find the GBA appealing, with its growing population and consumer potential. Cross-border fintech pilots are soon to launch. Meanwhile, developing Hong Kong’s northern areas will resolve pressing land shortage problems, increase housing supply and create jobs (expected 650,000). The plan should bring in market capital, encouraging public-private partnerships, not least green bonds, he predicts. Implementing the national security law and electoral system reform have ensured a stable social environment for business and investment. Embracing the GBA integration strategy will benefit Hong Kong’s long-term prosperity.

In his current position since 2017, Chen also serves on the Committee for Safeguarding National Security. He has rated highest among rising officials in recent polls and is expected to run in the 2022 chief executive election.

Hengqin’s focus should be on the real economy and creating jobs, says Cong. Firms applying to register their headquarters in the zone only for the tax cuts, running no actual operations, will be shunned, he warns. Space is limited, so only target industries, e.g. tech R&D and high-end manufacturing, will be supported. Macao’s selling points in culture and tourism can be channelled over the border. In Hengqin, however, gambling will be strictly prohibited. Macao is keen to cultivate the traditional Chinese medicine industry and modern financial services. The next step is to build up scitech infrastructure attracting international science, he says. A refined catalogue of encouraged key industries is to be worked up by NDRC (National Development and Reform Commission) and the Guangdong and Macao authorities.

Joining the State Planning Commission’s (now NDRC) national economy bureau in 1997, Cong was in his current position by 2020, having served as NDRC’s Party Leading Group secretary and spokesperson along the way. He is also involved in the coordinated development of the Jing-Jin-Ji region.

Young Hong Kongers should be more proactive in grasping opportunities in the GBA: visit its cities to scope their market potential. It should not be hard for professionals to learn about the mainland. We must keep open minds and find advantage in bridging mainland and global centres. Our experts can help PRC firms go global as mutual recognition of qualification speeds up and attracts global firms. Our biotech R&D centres can set up production in Guangdong, fostering commercialisation via cost advantages. GBA will not develop overnight: the economic and political trends need watching, as do opportunities in second-tier cities.