common prosperity: the next normal

Rising inequity is a problem for the CCP. Xi Jinping’s administration, which reined in most of its predecessors’ concessions to civil society in favour of re-centralising and expanding Party control, is now reviving talk of social equity.

A demo zone for ‘common prosperity’, the most potent example of this, was announced 10 June, with goals for 2025 and 2035. The chosen pilot province, Zhejiang, followed up with a 5-year implementation plan on 20 July, aligning the aims of the demo zone with those of the current 5-year plan (2021–25).

The innovations to be trialled centre on long-term governance, not unlike Shenzhen’s ‘socialist’ demo area (set up December 2019), or Shanghai’s parallel leading zone for socialist modernisation in Pudong (July 2021). Each focuses on a specific facet: tech innovation and entrepreneurship in Shenzhen, capital opening in Pudong and fair access to public goods in Zhejiang.

‘common prosperity’ for the 21st century

A more equitable society is baked into Marxist ideology, but over the decades PRC leaders have adapted it to fit changing priorities

A ‘new normal’ of slow-growth set in more than five years ago, but doubts over the returns from trade took time to permeate. Doubling GDP every decade or so is a fading memory; new growth drivers and KPIs are needed. Accepting the downplaying of GDP growth targets in the 14th 5-year plan, the Zhejiang pilot calls for incomes to double and the middle-income group to grow to twice its current size as more workers move up into it.

Higher incomes will ideally boost consumer spending, in keeping with Beijing’s disenchantment with FDI and exports. With stronger domestic demand, investment, it is hoped, will move to reinforcing industrial chains and high-tech production, i.e. self-sufficiency.

Public money will still be used to fund a safety net for basic social services: health, employment, housing and pensions. Hukou divisions between urban and rural residents are unlikely to be abolished; instead, services should be improved in counties and villages. Getting more resources to the countryside should ease the pressure families feel to find ways to enrol their children in urban schools, likewise how major cities feel about migrant workers.

With public finance covering the basics, the private sector is urged to offer higher-end services: rental housing, child and aged care, vocational education, health insurance and pension cover. SOEs (state-owned enterprises) must still contribute, providing backup and stepping in where the private sector cannot—or will not. Private capital is to be kept in check.

SOEs and private investors are encouraged to open ‘not for profit’ (read: affordable) kindergartens, schools, care centres, sports centres and hospitals. As recent disciplinary actions against big tech and the after-school training industry show, Beijing is only too willing to step in when industries, without advancing the Party’s goals, seem too bloated with funding.

where else but Zhejiang?

Zhejiang is a prime site for these policy trials. Private entrepreneurship, neglected in the Mao era when central concern was with building up an industrial (now rustbelt) northeast, rebounded strongly in the reform era. By 2002–07 Xi was making his name as Zhejiang Party secretary. Rendered a member of the wealthy, coastal club by Deng’s reforms, the province now has one of the narrowest urban-rural income gaps. As such, it embodies Xi’s New Era, where tech solutions blend seamlessly with manufacturing. Setbacks to common prosperity, which would spell trouble for Beijing, are least likely here.

Flanked by the Yangtze River Delta, coastal Zhejiang has a distinct history. Economic liberalisation saw it rise from Mao-era stagnation to join the wealthier provinces, ranking just below the urban clusters around Beijing, Shanghai and Tianjin. It is known for its competitive private sector and relative policy transparency. Key industries include electronics, textiles, chemical industries, agriculture and construction materials. In addition, Zhejiang is a leader in e-commerce and logistics. Hangzhou is home to IT giants like Alibaba.

Good as it sounds, common prosperity cannot but be contentious. Private firms and localities harbour interests—power bases—that are loath to change. Given Xi’s influence in the province, such resistance would be readily overcome if necessary, but the Party’s expanding control makes this possible via other avenues.

The Party presence will be felt more intrusively and pervasively than ever. Zhejiang already tests New Era grassroots governance as part of a ‘modernised’ Fengqiao experience, harking back to similar governance objectives in the Mao era. Now, grid-style governance is enhanced by smart IT, which has fine-tuned monitoring and the collecting of big data, and enabled individuals to lodge complaints ultra-locally. Smart IT and big data mean public services can be distributed according to individual needs, and emergency response can be faster and more nuanced, but only because of the extent of state intrusion.

Offering Xi another PR victory, common prosperity is, much like poverty alleviation, not permitted to fail. On the macro level this entails a shift from GDP to income targets. In micro terms, firms will have to account for their economic and capital contributions, but also for how they have bolstered public goods, specifically quality of life, national self-sufficiency and national security. How initiatives in Zhejiang play out in the next five years will indicate what is feasible nationwide. Official hopes are for a new interaction model that will embrace the state, individuals and enterprises in the digital age. 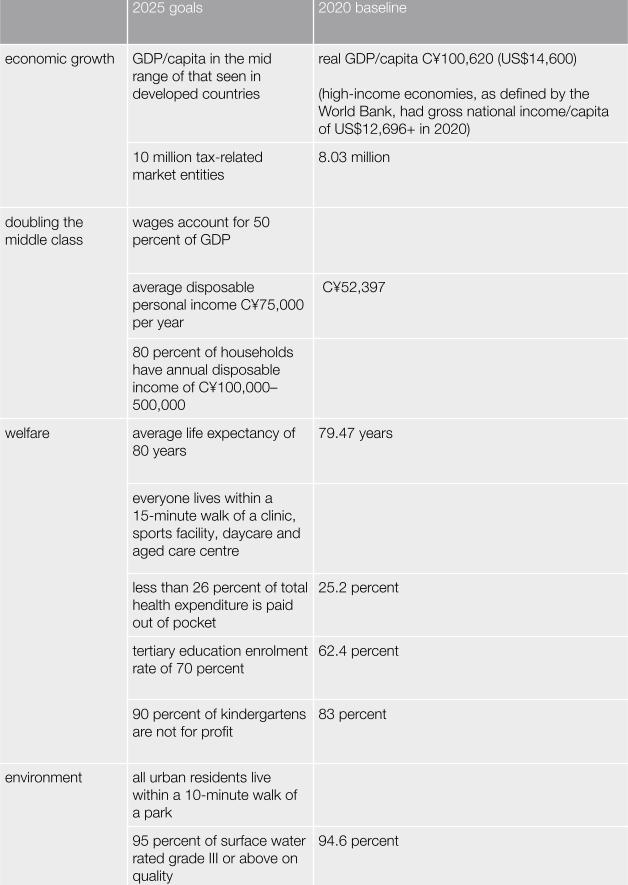 Tech innovation and digitisation are the forces driving the pursuit of common prosperity in Zhejiang, claimed Yuan in a June 2021 interview; they will be essential in any future nationwide rollout. He also proposes a new model of interaction between state agencies, individuals and enterprises working toward common prosperity in the digital age. Starting as a technocrat trained in aerospace engineering, Yuan was appointed Zhejiang Party secretary in 2020; the common prosperity pilot launched by the Party in June 2021 runs under his direction.

Economic and geographic diversity favours Zhejiang as a site for trialling promising approaches to development, argues Liu, who is hopeful of rolling out success stories to the rest of the country. To build up the middle-income population, Liu urges vocational training be improved; simply offering technical courses will not suffice. Training must encompass tech transformation and address industry demands. Skilled workers need more opportunities to develop and advance their careers.

Rather than simply raising incomes, the Zhejiang pilot focuses on more equitable distribution, notes Zeng. This will entail spending considerable political capital, but with NDRC (National Reform and Development Commission) as the lead agency there may be more political will to do so. Zeng’s expertise is in human geography and regional economics. Throughout his career as a scholar, both in domestic universities and in Germany, he has overseen research projects for local governments in the Yangtze River Delta and national agencies such as the Ministry of Human Resources and Social Security.