a chipmaker in Nantong, Jiangsu

A new industry policy paradigm is around the corner. This is the first in our series of cp.signals analysing major emerging trends: supply chain security, green development, advanced manufacturing, digitisation.

industry policy is ‘de-globalising’; preserving the PRC’s manufacturing base against external volatility is paramount in the ‘New Era’

In Xi Jinping’s New Era, international firms must pull off a fine balancing act: working more closely with PRC counterparts while alleviating national security concerns back home by fire-walling their operations in China.

A 15-year plan for manufacturing will be released this year in tandem with sector-specific 5-year plans. Supply chain security is displacing competitiveness in export markets as the top priority of the New Era. Self-reliance is the goal; the economy will ideally be supplied by domestic agriculture, industry and services. Above all, supply chains for the manufacturing base should stay wholly within the PRC.

Older strategies like Made in China 2025 were to foster high value-added exports on par with those of industrial powers like the US and Germany. While exports remain essential, boosting their competitiveness overseas is now secondary to defending PRC manufacturing from external volatility.

Global commerce has evolved since 2015, when Made in China 2025 emerged. Advanced economies have ceased to be the undisputed model; globalisation is considered to be in decline. For some, the COVID-19 pandemic revives zero sum narratives of industrial prowess translating into geopolitical power, a lynchpin of the perceived rise of the East and decline of the West.

Beijing agrees that a solid manufacturing sector guarantees long-term social and economic stability. Its commitment to go against the perceived natural trend of outsourcing means that China is seeking to offset rising production costs and decreasing labour supply with a combination of tax breaks, robust logistical infrastructure and support for automation and digitisation, as well as by relocating factories inland. Path dependencies and the sheer size of the domestic economy mitigate against a radical hollowing out of the industry base. Made in China has so far remained competitive globally, evidenced by growing exports.

Transitioning to a service economy is still encouraged, but the manufacturing sector takes precedent. We discern the following trends.

Top-down governance structures are being installed industry by industry. ‘Chiefs’ are being groomed to run regional supply chains. Provincial and local officials are assigned a local chain and oversee its expansion and resilience. Xi Jinping meanwhile calls on central SOEs (state-owned enterprises), despite their tendencies to monopoly and complacency, to take the lead nationally.

Details on how the new pattern is panning out are awaited. The more bullish foresee it improving resource allocation by designing chain-wide investments and reducing ‘unhealthy’ rivalry between localities. The more bearish reflect that top-down bureaucratic models don’t always get innovation right.

Several programs are in place to mend weak links. All industries are currently being surveyed by MIIT (Ministry of Industry and IT), with support programs in place to cultivate their strengths and tackle their weaknesses. A case in point is the 66 clusters of strategic industries identified by NDRC (National Development and Reform Commission) in December 2019 (see map). 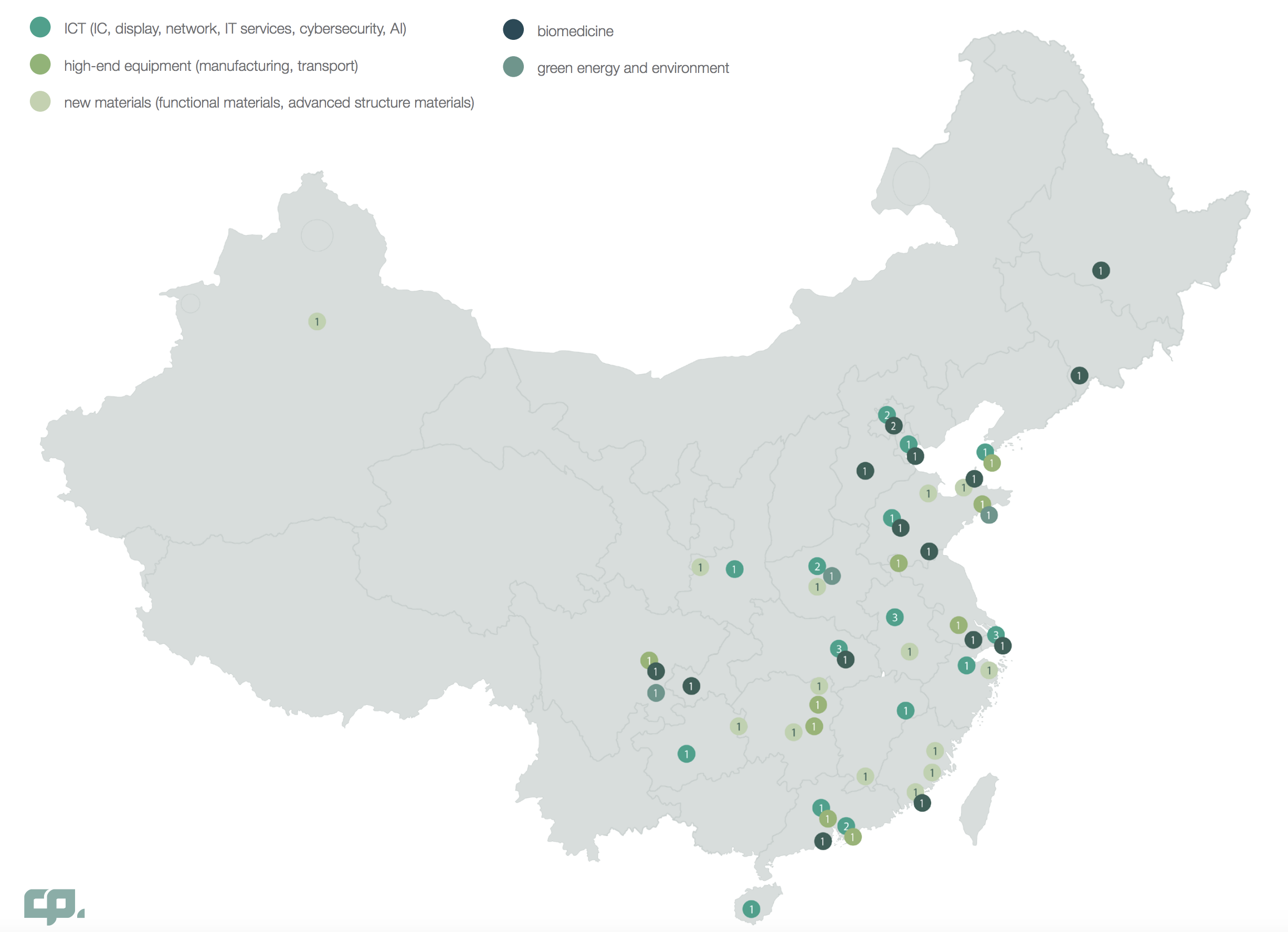 The 14th 5-year plan calls on sectors to foster ‘leading enterprises with core competitiveness’ to steer the development of their industries. Details are scant, but parallel programs at the local level suggest that the hope is to cultivate firms with well-developed upstream supply and downstream demand. This relates to ongoing programs fostering ‘manufacturing champion’ SMEs (small and medium-sized enterprises), i.e. those that produce world-leading, highly specialised goods.

For all their mixed results so far, measures to boost tech capacity will intensify, with the semiconductor sector a prime example (see cp.signal: just a bit dependent: China and global markets).

innovation: making it lean and mean

While ever more innovation is urged on SOEs—R&D investment is deemed just as important as profitability in performance evaluation—private enterprises are on notice to better align with central targets. Endemically short-sighted and innovating primarily in their business models, tech giants are now on notice to bet on industry and the real economy. Enforcement of national security and competition laws is the stick; subsidies and other support schemes the carrots.

Financial support, subsidies and commercial capital have been rewired to fit this vision. Take the much-hyped STAR Board, which tech firms ideally use to raise funds: listing criteria have tightened, discouraging domestic investors from speculating on fintech firms, like Ant, and real estate developers. Education giants are meanwhile losing access to the capital market.

the role of international business

Monopoly control over globally vital technology is close to impossible in the long run. From US industrialisation to the space race, history is not short of imitation and reinvented wheels.

Global firms, above all those betting on the PRC as both a manufacturing base and a standalone market, must ‘walk and chew gum’, becoming ‘local’ actors both back home and in China. They will face greater scrutiny from their own authorities, but the PRC’s market has not lost its allure as a global growth hub. This is surely the case in sectors that align with Xi’s 2035 vision, which includes rural revitalisation and climate change mitigation. Only by engaging more deeply with Beijing can they stay competitive in the New Era.

China should direct its limited scitech resources to tackling achievable goals, argued Liu in November 2020. Echoing the series on ‘stranglehold technologies’ he oversaw during his tenure as editor-in-chief 2015–19, Liu lamented that world leadership is realistic in so few areas at the moment: low-quality self-sufficiency should not be Beijing’s choice. International collaboration and globalisation are still inevitable. Poor basic research is the root cause of the PRC’s tech reliance: investing in it is the way to become a ‘socialist great power’ by 2050, he insists.

Guangdong province made GAC the ‘chain captain’ (链主) of its smart and NEV (new energy vehicle) chain. From 25 June 2021, ‘captains’ will now lead chains in Guangdong’s 21 pillar industries, with the provincial Party secretary the ex officio ‘chain chief’. This new Party bureaucracy is supported by a leading group for industrial development in a system replicated at the municipal level. As industry chain captain, GAC has developed battery tech domestically, partnered with IT giants and invested in key suppliers in semiconductors, sensors and data security. Trading on the Hong Kong exchange, GAC is majority owned by a provincial SOE. Its joint ventures with Honda and Toyota ranked 10th and 12th in China’s 2020 car sales.

Finance must develop the real economy, from which financial actors may derive profits. The alternative—generating profits only from financial signals—diverges from reality, said the former PBoC governor at the 2021 Lujiazui Forum, as seen in the US mortgage market before the 2008 financial crisis.

December 2020: Beijing vows to clamp down on ‘disorderly expansion of capital’, following which market, industry and national security regulators launched an attack on big tech

May 2019: Huawei receives the first blow from the Trump administration

September 2014: the national IC big fund is set up, with billions of RMB to distribute