Rising global prices of agricultural and industrial inputs are disturbing Beijing. For all its invoking of self-reliance, China’s economy will remain dependent on a range of low- and high-tech imports, even to meet domestic demand. Long-term solutions are sought from overseas investment, particularly for low-end commodities, though timelines are long, costs and risks high, and success far from assured.

Stabilise commodity prices, instructed State Council, 19 May. A torrent of detailed measures and ‘window guidance’ ensued. The campaign appears transient, geared to the short-term. China’s PPI (producer price index), gauging changes in industrial product prices, reached 8.8 percent y-o-y growth in June, down slightly from the 13-year high of 9 percent in May. Price pressure is particularly strong for iron ore and animal feed, while semiconductors are in short supply.

Iron and steel prices, high all year, soared in May, prompting state intervention. A mix of supply drag in Brazil, actual demand, loose monetary policy and market speculation over future demand have led the market to boom. In response, import and export tariffs were adjusted to deter exporters, while numerous inspection visits were made by State Council, NDRC (National Development and Reform Commission) and SAMR (State Administration for Market Regulation) to probe malpractice and speculation.

Long-term global trends in the sector are expected to be determined by the US infrastructure plan (demand) and Xi Jinping’s pledge of carbon neutrality (supply). As the steel industry emits 15 percent of China’s carbon, it is bound to face regulatory pressure to further cut emissions. Yet, despite MIIT (Ministry of Industry and IT) proclaiming that crude steel production should decline in 2021, and regulations tightening on Tangshan (the steel production hub 150k east of Beijing) in March, output soared elsewhere, drawn by high prices and making a y-o-y increase ever more likely. Green tech, hopes CISA (China Iron and Steel Association), will gradually change the equation for how localities boost economic growth, and how Beijing cuts emissions.

Further upstream, reducing reliance on Australia for iron ore and guaranteeing future supply are on the drawing board. Domestic mining should, declared a draft policy in January, account for 45 percent of the total by 2025; domestic scrap steel use will rise some 25 percent to 320 million tonnes per annum as well.

PRC-owned overseas mines should account for over 20 percent of imported iron ore. Cooperation with neighbours Russia, Myanmar, Kazakhstan and Mongolia is highlighted and developing sources in Southeast Asia, Central Asia and Africa has been proposed. 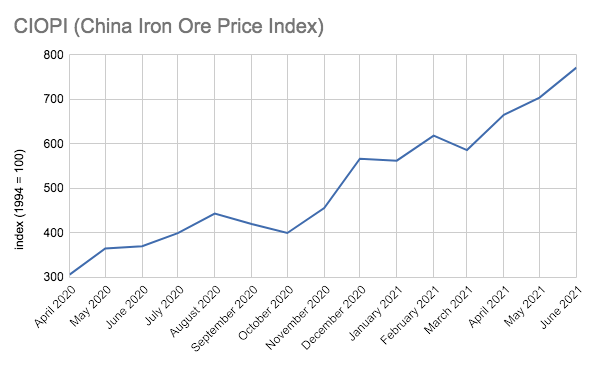 Prices of the two most important feed grains, corn and soybeans, hit record highs in 2020: imports of alternatives (wheat, sorghum and barley) rose as well. This ran on into 2021, driven by recovering pork production post-African swine fever, and restaurants reopening post-COVID-19. The underlying long-term cause is growing domestic demand for proteins and edible oils.

For feed-grade soybeans, admits MARA (Ministry of Agriculture and Rural Affairs), curbing reliance by increasing domestic production is not plausible: arable land for staple food production is at a premium. Planting more acreage to corn is feasible in the northeast where planting can be extended over some 1.3 million ha y-o-y. Corn was in overproduction not so long ago: so restoring it is not out of the question. New feed formulas containing lower proportions of soybean and corn have been approved. For all crops, MARA is promoting higher yield, not least by gradually opening the door for GMOs.

Optimally, soybean imports will then stabilise at some 100 million tonnes over the coming decade. The bulk is currently sourced from the US and Brazil, but Beijing is anxious to diversify, hoping to source more from BRI (Belt and Road Initiative) countries. Tanzania, a prospective supplier, exported a first trial batch (120.2 tonnes) to China in 2021. Others, mainly economically compromised states, offer little stability. Russia, for instance, Beijing’s leading BRI partner in this trade (currently comprising 1 percent of imports with plans to rise to 3.7 million tonnes by 2024), imposed a 30 percent export tariff on 1 February. 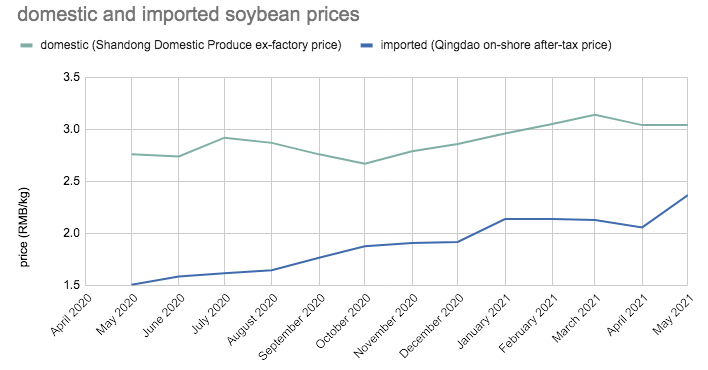 Boom and bust cycles in the sector are a function of disconnects between fast moving, zero inventory demand and slow, capital intensive setup of production facilities (fabs). All this is currently worsened by

Longer term, there is palpable risk that current shortages will be followed by oversupply. Aspirational plans in China, the US and Europe to build factories are motivated by national security concerns rather than projected market demand. The PRC is well positioned to compete in segments of the market that rely on relatively mature technologies. These are likely to make up a growing part of the overall market, as Moore’s Law (of exponential increases of scale) will eventually hit a cosmic boundary to miniaturisation.

At the high end of the market, performance gains will increasingly turn on customised chip design. The lithography, design apps and IP needed to compete at the cutting edge are not keeping up in the PRC. Purchasing these capabilities via overseas M&As has largely been cut off, with the most recent case in point being the halted Chinese takeover of Newport Wafer Fab in the UK. Continued massive imports, especially of high-end chips, is the likely outcome for the coming 5–10 years, at least.

preparing for the worst

Prices and shortages will, domestic analysts expect, be resolved in the short term (up to a year). There are few signs as yet of higher production costs translating into higher consumer prices. Exports remain buoyant, covering for weak domestic demand. RMB appreciation is unlikely, given it would disrupt this balance.

Meanwhile, Beijing, currently on Party-administered heavy doses of ‘baseline thinking’, will prepare for the worst. Securing resources at reasonable prices through investments, partnerships and bilateral agreement will be on the long-term wish list. These would be seen as an extension of the internal market, rather than external to it. This reading of dual circulation, Beijing’s current paradigm, has far-reaching consequences for PRC trading partners.

MIIT will study chip shortages in H2 2021, as well as currency fluctuation and constraints on energy consumption, Wang told a meeting on the industrial economy, 22 June. Recovery from the pandemic is uneven and complicated by structural divergences: supply–demand, industries–regions–companies. Rising commodity prices knock-on to the production costs of downstream firms and SMEs. The ministry closely follows signs of problems and hidden risks.

Raw material price surges hurt industry profits, warned Xu in June 2021, causing sectors to diverge further in their speeds of recovery. Mining and raw materials may prosper, but May data shows intermediate firms struggle to make profits. Revenue growth is dominated by just four sectors: autos, pharma, coal and smelting industries. Gaps between production inputs and consumer prices will persist during H2 2021, and hence add pressure on intermediate firms, absent an upturn at the consumer end. Exports have benefitted from US and European demand. This is likely to decline as their production ramps back up.

Higher production prices are unlikely to translate into inflation, predicted Fu in mid-June 2021. Major demand indicators are yet to fully return to pre-pandemic levels, while supply and production have kept growing rapidly. Grain production is stable and supply of major agricultural products is sufficient, he said. A 24 percent decline in pork prices in May kept the CPI low, and the sector remains on track to recover. Policy, Fu argues, should refrain from opening the floodgates and instead focus on stabilising prices.

2 Jul 2021: structural subsidies for corn, soybean and rice producers, one-off subsidies for grain farmers and promotion of high-quality varieties were announced by MoF (Ministry of Finance) and MARA

18 Jun 2021: adjustments to the way influential indices of major commodity prices are calculated issued by NDRC

16 Jun 2021: State Bureau of Grain and Reserves announced it will release copper, aluminium and zinc reserves

1 Jun 2021: the central bank moves to ease RMB appreciation pressure against the US dollar

31 May 2021: ‘Action plan for deepening price mechanism reform during the 14th 5-year plan’ released by NDRC

23 May 2021: regulators call in key commodity companies with strong market influence in iron ore, steel, copper, aluminum and other industries