data in the new era: localise or stay low

not every foreign business need fear the cold winds of data regulation, but MNCs that capitalise on the PRC’s vast market and R&D capacity can expect to shiver

In today’s ‘dual circulation’ era, global firms will have to set up two separate data systems: one to remain onshore for their PRC operations, one for the rest of the world. Regulations will come sector by sector. Activity in relation to autos and health show others what is to come.

In recent years, international industrial interests, above all those that are R&D intensive, have spoken of building at least two separate supply chains and R&D bases. Beijing’s emerging cross-border data regime provides a microcosm of its response to ‘decoupling’ from global supply chains.

Fully localise operations: this is the takeaway for MNCs (not least giants like Apple and Tesla) looking to capitalise on PRC talent and data troves. Little will change for firms that see China as only a manufacturing base or minor market. Preferential treatment may be offered at favoured sites like Hainan, but don’t count on them for blanket exemptions.

Four years and a trade war after the Cybersecurity Law, Beijing is set on clarifying the rules. CAC (Cybersecurity Administration) and MPS (Ministry of Public Security) are working on criteria to sort out types, thresholds and sensitivity of important data (mainly national security, the public interest, economic order and/or state operations, see annex I).

Normal data (including personal information) vital to business and trade can flow across borders. But as stipulated in the recent labyrinthine laws on cybersecurity and data security, as well as that proposed for personal information protection, data of strategic importance may not be transferred without state approval (see annexes I and II). 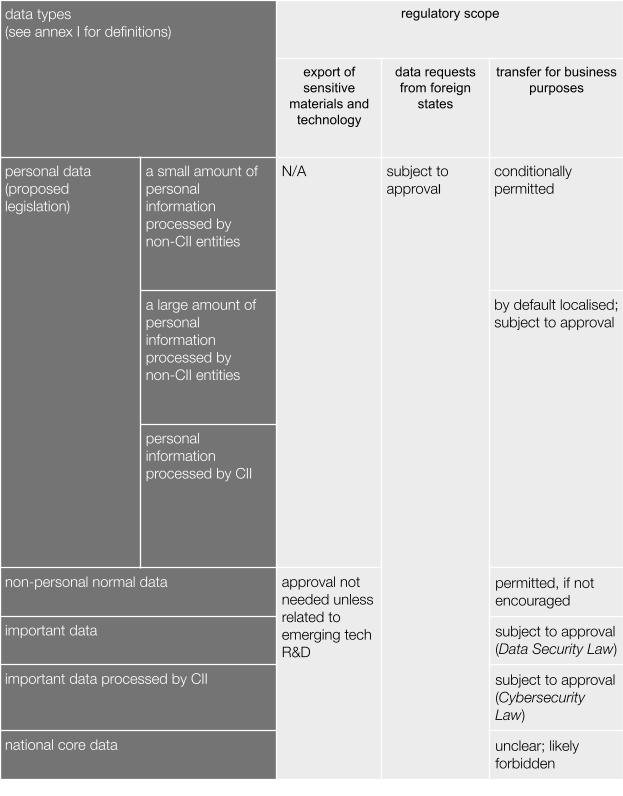 Defining the data regimes results from intense behind-the-scenes negotiations among stakeholders. The broad definition of terms, processes and categories leaves room for tailoring to sectorial and even local needs. Regulatory design will not rest with the security establishment, privacy advocates or protectionist officials: sectors or regions whose data localisation rules deter investment may win more lenient terms from central agencies and/or local governments. Greater leniency is also mooted for SMEs, sensitive to high compliance costs.

Such efforts are mirrored in the healthcare sector, where NHC (National Health Commission) has formulated data regimes. Population and healthcare data are subject to stricter rules than those prescribed by the new laws: most data, personal or not, must remain in-country. Transfer of human genetic data is strictly prohibited and separately regulated. Similar to the auto sector, smart medical equipment is governed by standalone rules.

Restrictions on cross-border data transfer are unlikely to be rigidly enforced, given that export control rules have never been carried out with much heft. Limited capacity at the centre is one reason, not unlike General Data Protection Regulation enforcement in Europe; fears of stifling foreign R&D investment is another.

Big firms holding personal information in bulk, or whose IT footprints have a significant impact on the domestic economy, are the bogeymen. They will be (or, as in the cases of Apple and Tesla, already are) the first to be asked by regulators to store personal information and important data locally.

Sectors mooted for more stringent treatment are those in which all parties converge on the need to localise storage, e.g. healthcare and genetic resources or, even more strategically, smart vehicles and voice recognition algorithms.

Prior to passage of the Personal Information Protection Law and auxiliary regulations, international players will be reviewing their China operations and associated data flows. Once they are embroiled in controversy, or when Beijing’s bristles at some geopolitical event, it will be too late.

Highly influential in China’s cyberspace, TC260 issues scores of standards that guide both officialdom and industry. CAC in one case held local officials to a TC260 privacy standard at the height of the COVID-19 pandemic.

The committee is led by CAC, MPS and MIIT officials; standards are often set by working groups of stakeholders, ranging from academics to tech giants. Alibaba and Huawei are particularly active in shaping industry standards. Token foreign companies are to be found in standard setting, though rarely.

What qualifies data to stay in China, advises Zuo, must be clarified as soon as possible. The ‘importance’ criterion by which it could be prevented from leaving, per the Cybersecurity and Data Security laws, should exclude all but critical security and public interest content. Normal flows of commercial data must not be discouraged, Zuo notes, in line with international standards.

Now steering a CAC-backed group working on criteria for important data, Zuo is a data security veteran. His doctoral worked touched on the PRC’s initial strategy in this field.

Data security regulations should leave space for the autonomous vehicle industry to grow, argues He Shanshan, given that China is competing with other countries in this field. Regulators are inclined to grade data based on its risks, she notes. Local-level regulations should be more practical than national ones.

Expert in legal issues surrounding autonomous driving, He Shanshan is a special advisor to the Ministry of Transport, the Supreme People’s Court, as well as the municipalities of Beijing, Shanghai and Changsha.

annex I: four levels of data and two levels of personal information

Data is divided into four grades under the Data Security Law, coming into effect September 2021, and the Cybersecurity Law.

Normal data (i.e. day-to-day private and commercial data) can be transmitted across borders freely given its vital role in normal business and trade flows, as long as it is not subject to export control.

Note that it may also be in the interest of businesses to store their data locally, or even delete it as soon as possible. Autonomous driving experts for instance note that smart vehicles collect an extraordinary amount of data: storage or cross-border transfer on this scale is not necessary or economical.

Important data, which is yet to be legally defined but generally refers to data that has implications for national security, the public interest, economic order and/or state operations, cannot be transferred overseas without approval from cybersecurity and industry regulators. Watch for

Important data processed by CII (critical information infrastructure), which is also yet to be legally defined but generally refers to ‘network facilities and information systems vital to the continuous and stable operations of critical businesses’, which are in turn essential to national security, social stability, public health and economic security. Similar to important data, industry regulators are instrumental in defining what constitutes critical businesses. MPS has an internal list of CIIs, and experts close to the legislative and standard-setting processes suggest that CII does not concern most foreign enterprises. Watch for

Personal information is divided into two levels under the Personal Information Protection Law, still in draft, and the Cybersecurity Law.

Non-CII businesses that process a small amount of personal information, according to the draft Personal Information Protection Law, can transfer it overseas as long as they obtain consent for the transfer, conduct a pre-transfer risk assessment, keep a record of all transfers, and use one of the officially sanctioned mechanisms

Note that there is some uncertainty at the sectoral level. Apart from the law still being in draft and subject to change, it may also contradict the proposed rules on automobile data management, which may suggest all personal information collected by smart vehicles should be kept in China. Some legal scholars believe the proposed auto rules will conform to the Personal Information Protection Law once it is finalised.

A labyrinth of laws, regulations and standards indicate the direction of cross-border data transfer. The major ones, including drafts and those proposed, are as follows