The Greater Bay Area is the frontrunner of many 14th 5-year plan initiatives: prioritising manufacturing power, carbon neutrality, rural revitalisation and support for the ageing society all started there. Two years after the GBA master plan was issued, a series of cp.signals will review progress toward the GBA vision over coming months. We begin this week with its political rationale and industrial ambitions.

setting aside local rivalries, the GBA is taking major steps to realise the 14th 5-year plan

Geopolitical challenges to the traditionally export-oriented GBA region have shaken policymakers. They have responded by doubling down on support for scientific and industrial development. Political change now sets the stage for further economic integration.

the GBA vision and electoral change in Hong Kong

Beijing expects the Hong Kong government to roll out social and economic reforms to mitigate tensions, boost public support and bring the region together.

Beijing’s vision for 2035 ranks bolstering the domestic economy above trade to hedge against geopolitical tension. For the GBA, highly reliant on the global economy as well as supplies from other parts of China, this presents real and present risk. Leading GBA tech firms like Huawei and DJI are already under sanction from Washington.

Given these setbacks, GBA is evolving into a self-sufficient city cluster (see map). Shenzhen and Guangzhou, the region’s most expensive cities to live in yet also the most attractive to internal migrants, are shifting to services sectors such as R&D and finance, that serve both domestic and international markets. Traditional manufacturing hubs, e.g. Dongguan, are defending one of the region’s major advantages—a complete supply chain for electronics and appliances—while moving into digitisation, automation and advanced equipment. Some cities are highly targeted: Foshan’s Nanhai district is moving into hydrogen and fuel cells; Zhuhai, working with nearby Macao, is looking to tourism and leisure.

Not all are equally prepared. Zhongshan, an export processing hub whose growth is among the slowest in the region, is struggling to find its place in the new domestic economy. Things may not improve until 2024, when the Shenzhen–Zhongshan bridge opens.

major cities in the GBA 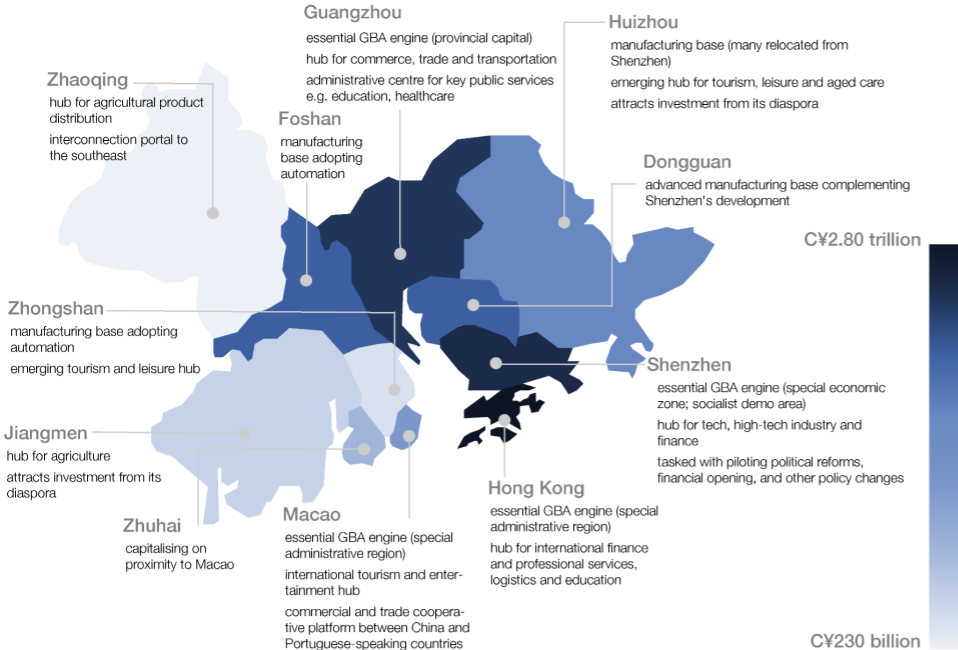 With its tech firms increasingly isolated from global value chains, the GBA is investing heavily in original research. Despite its impressive R&D in the industry sector, academic and scientific research capacity (readily available in Beijing and Shanghai) is lacking—for now.

The price tag on this investment is massive, running to the hundreds of billions. Racing to go big—big research facilities and big universities—major GBA cities are sprouting new ‘science towns’ to host new laboratories. At least 17 higher ed campuses are now under way, often partnering with Hong Kong universities and tertiary powerhouses in the north (e.g. Beijing, Harbin, Xi’an). In line with the region’s industry focus, they will largely target the graduate student market.

Hong Kong and Macao academia is expected to serve the GBA vision. Research funding and campus building subsidies are open to them, despite already being better set up than their GBA counterparts. NDRC (National Development and Reform Commission) announced a new scitech development fund for the region in April 2021; a primary focus is supporting mainland scitech ventures from Hong Kong and Macao. Local players are willing partners: the Chinese University of Hong Kong’s Shenzhen branch, launched in 2012, is already considered a top campus in the region.

Overcapacity seems tolerable for now. The new facilities will take years to recruit faculty and more to mature, though they will strive to repeat the success of the formidable Hong Kong University of Science and Technology, only three decades old. Administrative barriers need to be resolved: faculty complain, for example, that accounting rules vary greatly between jurisdictions. Most pressing, the new capabilities must serve the existing R&D base.

Deep-seated rivalries divide the GBA. Beijing’s will aside, Guangdong, fearful of losing out to the YRD, has to make it work.

Integration is coming to the cities. A railway infrastructure plan will see C¥47 bn invested in hundreds of kilometres of new rail connections. Guangzhou’s southeastern expansion and Shenzhen’s western development are on their way to a Tokyo-like conurbation.

The region’s trajectory will soon be set. In Hong Kong, we await elections for the legislature (December 2021) and chief executive (March 2022). On the mainland, if cities move beyond partnership pilots, e.g. between Guangzhou and Foshan, self-defeating rivalries may be on the way out.

As Guangdong’s Party secretary, Hu warned that the province risked losing its status as a core region of national economic development, becoming characterless, albeit rich. He went on to pledge to build an innovation-based economy, developing the Pearl River Delta (predecessor of the GBA) into China’s silicon valley. He then proposed the GBA during the 13th 5-year plan (2016–20). In 2016, under his tenure as Party secretary (2012–17), Guangdong led the nation in nurturing innovative firms. As vice premier he oversees agriculture policy.

The GBA, claims Shyy, enables cities there to amplify their comparative advantage via partnerships. Despite its outstanding research capacity, Hong Kong lacks industrial heft in tech transfer; while Shenzhen offers better conditions for business and more diverse industry R&D. The cities complement each other, giving them a competitive edge. Celebrated in aerospace engineering, Taiwan-born Shyy was promoted to HKUST chief vice president in 2010, becoming president in 2018.

August 2020: the GBA inter-city railway plan is approved by NDRC

July 2019: Guangdong issues a three-year plan for the GBA, as cities in the region roll out new science and research projects

April 2019: Nansha Bridge, the second bridge that connects the two sides of the Pearl River delta, is opened to the public

February 2019: the GBA masterplan is issued by the CCP Central Committee and State Council; it is soon overshadowed by social and political unrest in Hong Kong

October 2018: the Hong Kong-Macao-Zhuhai Bridge is opened to the public, nine years after construction began and decades after it was first proposed

December 2016: Shenzhen-Zhongshan Bridge begins construction, is expected to open by 2024

September 2014: Chinese University of Hong Kong opens its Shenzhen campus to the first intake of students

March 2009: Guangzhou and Foshan sign a framework agreement on integrated development; it was later extended to Zhaoqing

July 2005: two SKLs (state key laboratories) are set up in Hong Kong, the first of their kind beyond the mainland; since then 16 have been approved across Hong Kong

March 1998: Hong Kong/Guangdong Cooperation Joint Conference is set up to promote cooperation between the two governments

June 1997: Humen Bridge, the first to connect the two sides of the Pearl River, is opened to the public