Political pageantry usually dominates the annual Two Meetings, with policy coming a poor second. This year the domestic Charity Law was the only significant legislation to pass, though last-minute changes left doubt as to its intention and effects. The 13th 5-year plan, placing innovation at the centre of industrial development, was also given final shape.

Li Keqiang 李克强 announced economy-wide VAT roll-out on 1 May 2016. Lou Jiwei 楼继伟 reiterated the need to ‘improve’ the 2008 Labour Contract Law. Under the ‘new normal’ of lower growth rates, and with the state positioning itself as entrepreneur and SME champion, changes to increase labour market flexibility are likely.

With the theatre over, the policy cycle has entered a time of top-level prescriptions: State Council Guiding Opinions will set the legislative tone, leaving agencies to flesh out details. SOE reform remains in the spotlight, following February moves to tackle steel and coal overcapacity. With Li urging swift action, moves to address corporate debt are anticipated, most likely from CBRC. For now, however, deleveraging is proceeding without central orchestration. Tianjin’s restructuring of Bohai Steel Group’s C¥192 bn debt is a test-bed that will influence an eventual national model. 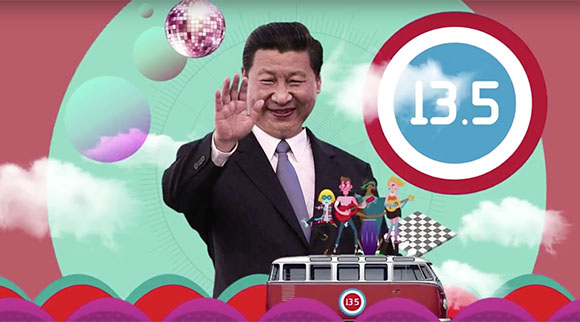 The 13th iteration of the world’s largest parallel planning process will be licked into final shape this week. China’s next 5-year plan will be tabled at the 2016 meeting of the National People’s Congress and unveiled by mid-March. full post open access →


1. A State Council researcher for most of my career, I became deputy minister of the Ministry of Industry and Information Technology in late 2015 to oversee the restructuring of ‘zombie enterprises.’ I am the face of the announced C¥100 bn fund for laid-off workers from these zombie companies, which hopes to offset the labour impact of mass closures. I have suggested numerous policy solutions to help address massive industrial overcapacity, including raising environmental and energy efficiency standards and promoting international Capacity Cooperation.

2. As Xi Jinping’s 习近平 close confidant and economic advisor, I helped develop the economic reform blueprint, was central to the November 2013 Third Plenum Decision, and led drafting of the 13th 5-year plan. My brainchild, supply-side reform, has been a Xi mantra since the lead up to the October 2015 Fifth Plenum. In developing the idea, I sought a compromise between pro-reform and pro-stability factions. While my carefully crafted initiatives have failed before, I expect supply-side reform will influence policy direction for years to come.

3. I champion a market-based approach to charity to maximise donation value rather than state control. Chief of personnel of the CCP Youth League in the 1980s, I later ran the successful ‘Hope Project’ to help rural school dropouts in impoverished areas. I insisted that Hope operate in a voluntary, market-based fashion, making a real difference. I’m a harsh critic of state-run charities for stifling civil society and have called for clearer legal status for NGOs, charitable trusts, social enterprises and online donation resources. Thus, I vocally called out the Charity Law draft for failing to clarify these fundamental institutional divisions.

The policy patchwork to support redundant workers amid industrial transformation will do little to ease fears of a ‘wave of layoffs’ threatening stability. full signal client access →

Transitioning from ‘traditional’ to ‘modern’ agriculture, long in the pipeline, will feature in the 5-year plan. Opening up agricultural industrial chains for the first time, this transition requires a comprehensive food security strategy, already presented in Doc 1, and a still under-development food safety strategy.

central gov’t and capital markets should take on local debt
Tencent Finance | 24 march
The size of local government debt does not pose excessive risk, says Li Daokui 李稻葵 Tsinghua University, because it is largely tied to infrastructure rather than social security (as in the US).

‘Five insurances and one fund’ is the slate of employment-based social funds for workers. The five mandatory insurance programs—pension, medical, unemployment, workers’ compensation and maternity—are regulated by the Ministry of Human Resources and Social Security. Worker and employer contributions together amount to up to 40 percent of an individual’s salary, sparking debate over both heavy fee burdens and potential fund shortfalls. The ‘one’ fund—the housing fund—is regulated by MoHURD, falling outside the bounds of the 2011 Social Insurance Law

Australian policy consultant David Kelly runs Beijing-based thinktank China Policy. He said the government had always had strict control of the media, but the public’s attitude toward it is changing.

China Policy’s David Kelly says the country’s leaders want to ‘digitise the China dream’ to achieve a ‘moderately prosperous society’ in the next half-decade. But it comes at the same time as troubling concerns over censorship and growing authoritarianism are also evident.

As David Kelly of the China Policy consultancy told the Financial Times, Ren represents a “trend in society which is totally fed up” with Xi’s divisive and repressive leadership style, and is not afraid to speak out.

According to Charles Horne, economic research manager at China Policy, a think tank in Beijing , these delays are due to disagreements over the leadership’s policy direction, saying ‘the messages from above are often diffuse, there is no unified front.’

David Kelly, director of research at consultancy China Policy, said the affair had shocked Chinese society. “He’s crossed a line which is not just disrespectful to the emperor,” he said. “He represents a trend in society which is totally fed up. I was at a dinner party last night and the tone was disbelief.”

China Policy is a Beijing-based research and advisory company. Supporting our clients at multiple levels, from in-house research teams to CEOs and boards, we help them anticipate, understand and respond to China’s changing domestic policy and geopolitical environment. Contact us for more information on our services