In a year of state-led effort to digitise and upgrade the Chinese economy, PBoC and 9 other agencies laid out a basic law for internet finance on 18 July. The law divvies up regulation of anything that might be considered internet finance between its cosignatories, striking a conciliatory tone with the industry and reaffirming state support for e-commerce. With uncharacteristic speed, PBoC, CIRC and CSRC have already released supplementary regulations. But many more must follow before a clear picture emerges.
The document aims to 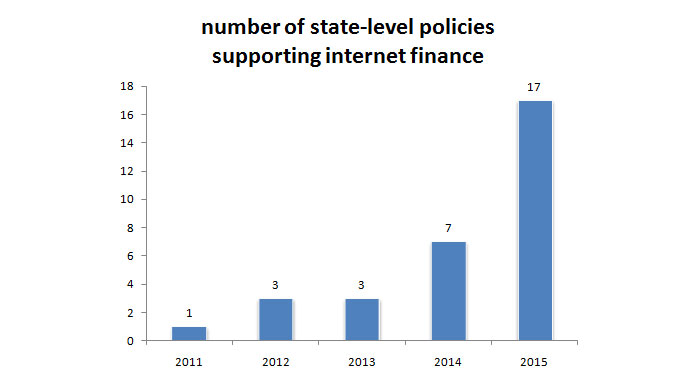 banking on the internet for the future

27 dec 2014: PBoC increases scope of financial products that must hold deposit reserves to include third party payment investment funds like Yu’ebao, but for the moment does not raise reserve requirements

The Guiding opinions are primarily orientational, intimating the future direction of state support for the industry. Particularly notable is that e-commerce, while subsumed by internet finance, is treated as a separate policy category, indicating its newfound primacy in state planning. While state planning increasingly views internet finance as a policy tool to bring banking to those left out, rhetorical support is not matched by actual safeguards to ensure industry development extends financial inclusion. Important to watch in the future are challenges for the industry that the document neglects or leaves for supplementary policy to define: establishing privacy, transaction security and cyber security standards, protecting consumer rights, and ensuring information transparency.

The Guiding opinions, in caging riskier lending and fundraising practices and setting clear policy goals for industry development, should throw cold water over hype that internet finance is an untapped gold mine. Banks’ profit margins have shrunk in recent years, and the internet serves a tool to increase efficiency and reduce transaction costs while increasing middle-income customer base. But this is merely expanding at the margins; there are no windfall profits to be made. From a regulatory perspective, the important step is requiring licensing for companies participating in Internet finance.

The Guiding opinions bring a lot of grey areas into light, but it is still too early for a verdict. Many follow up regulations are needed, and at the same time, many facets of the industry are still young and amorphous. In some cases more information is needed before effective regulation can be put in place, while in others, industry development is waiting for clearer regulation. P2P regulations, for instance, should be general. The infantile sub-industry is undergoing a fundamental shift from competing on marketing and financing channels to asset quality, so it is too soon to codify detailed regulations. Encouraging Internet finance companies to list however, is unlikely to make substantial progress without clearer guidelines for listing.

Spearheading formulation of internet finance regulations, PBoC strikes a balance between encouraging innovation versus insulating state banks. It set the tone for the internet finance regulation in its reponse to Yu’ebao. After Alipay’s money market fund caused a liquidity crunch in the interbank market in early 2014, state commercial banks began fighting back by capping transfers. PBoC stepped in, silencing calls to shut down the fund but constraining its use as an investment tool by limiting daily transfers to third party payment platforms. Currently researching how to increase rural access through encrypted SMS.

Alibaba Group spun off its financial arm, best known for third party payment platform Alipay, in 2011. With a user-base three times that of paypal and given the breadth of Alibaba Group’s e-commerce platforms, the two are practically a separate central bank and economy, respectively. Although the dramatic decrease in interest rates has compromised the viability of its money market fund Yu’ebao, Ant Financial will stay at the cusp of innovation in internet finance. Following Tencent’s Webank, Ant is a major backer of digital Mybank, debuted in June. In August it launched Ant Fortune, a wealth management product that connects Yu’ebao to other investment funds—900 and counting—through its partnership with a local brokerage. It has its eyes set on allowing users to invest in the stock market directly. CSRC would have to grant it a brokerage license first.